For the Earth-97 version of the character, see Batgirl.

Sergeant Barbara Gordon is a forensics analyst at the Gotham City Police Department.

Barbara Gordon is the daughter of GCPD Commissioner James Gordon. Barbara would eventually join the GCPD like her father, and rise to the rank of Sergeant within the police force. She would also eventually enter into a romantic relationship with Harvey Dent, the city's District Attorney. Over time, Barbara started talking less with her father.[1]

"There will be no city business discussed at this table. It's a special occassion."
"Halloween? Is that why we're all dressed up like rich people? In a fancy restaurant, drinking wine?"
―Harvey Dent and Barbara Gordon[src]

On one Halloween night in Gotham City, Barbara and Harvey Dent went on a date at a restaurant on the 59th floor of a tall building. Barbara asked Harvey if the pleasantries were being paid for by Gotham, but he told her there'd be no talk of city business as it was a special occasion. She jokingly assumed he was talking about Halloween, and that the holiday was the reason she and Harvey were dressed like rich people drinking wine in a fancy restaurant. Harvey attempted to propose to Barbara, but was interrupted when Barbara spotted Batman outside of the building.

This was only a minor interruption, as Barbara was proposed to by Harvey, handing her an engagement ring. She couldn't give him an answer, as she wasn't expecting him to propose to her, so Harvey insisted she take the ring home and try it on, and think over her decision. However he then pulled out a coin and handed it to her, giving her the choice to decide by chance instead, with tails being yes and tails no. Barbara was confused, and gave Harvey back his coin. Before she could give Harvey her answer, an explosion shook the building, caused by the explosion of the on-ramp outside.

After the situation had been dealt with by Batman, Barbara and Harvey exited the tower they had been inside of. Harvey stopped and was on the phone with the GCPD, and at this moment a goon ran by and stole Barbara's purse, taking it to a nearby alley. As Harvey took care of the goons, Barbara heard gunshots and came running to the alley, where she found Harvey alive, to her fortunate surprise. She scolded Harvey for being reckless, saying that she could replace a purse but could never replace him.[1]

"What are we finding in the Batman locker?"
"Andy down in evidence gave me a full inventory. Your office has to submit a formal request for an independent forensic analysis if you want to play with the toys."
―Harvey Dent and Barbara Gordon[src] 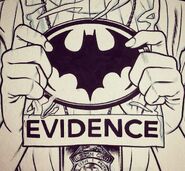 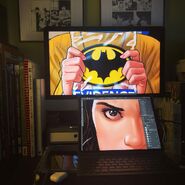