Batman
The Bat
The Dark Knight

"You see, I'm both Bruce Wayne and Batman not because I have to be. Now, because I choose to be."
―Batman to the Riddler[src]

Bruce Wayne is a billionaire from Gotham City and the CEO of Wayne Enterprises. He became the vigilante Batman in response to the sudden and brutal murder of his parents when he was ten. He sees himself as the protector of Gotham, aiming to clean up the city's crime and corruption while bringing its criminals to justice by any means necessary.

Over the years to come, Batman would fight many other eccentric criminal masterminds, the twisted Two-Face, the manic Riddler, Mr. Freeze and Poison Ivy. In the course of these events, Batman found a crime-fighting partner in Dick Grayson, who became Robin, and another ally in Alfred's niece Barbara Wilson, who became Batgirl. He also seemed to come to terms with his parents' deaths, seeming to enjoy his role as Batman.

Bruce Wayne had been born to wealthy but civic-minded parents in 1959. The noble Doctor Thomas Wayne and the philanthropic Martha Wayne had worked tirelessly to reverse Gotham City's urban decline, and had become renown for their glittering charity fundraisers and their support of initiatives to stimulate the city's growth as a place without crime and poverty.

At one point, Bruce attempted began taking riding lessons from Alfred, but stopped after one lesson due to a sprained ankle.

In 1963, on one cold late October night when he was ten years old, Bruce urged his parents to take him to see a movie  and his father gave in. The family went to the Monarch Theatre to see Footlight Frenzy.

After the movie, his father had decided they should walk for a bit before taking a cab back to Wayne Manor. The family happily walked down the sidewalk and it wasn't long before his mother had noticed someone following them. Thomas and Martha were subsequently gunned down by an unknown assailant, leaving Bruce as the only survivor

] Bruce went down on his knees between the dead bodies of his loving parents and began to cry. He prayed that he would eradicate crime from Gotham's streets so that no one else would suffer the same pain. Beat cop Jim Gordon was the first official on the scene and attempted to console Bruce, but to no avail.

On the night of his parents' wake, the priest's words gave the distraught Bruce no comfort. Bruce walked over to his father's desk and noticed a red leather book lying on it. It was his father's journal. His father had written in it every day in his life, but now the journal will never be finished. Bruce took the red journal and ran out into a powerful storm. He fell in to a centuries old cave. When he got up he looked forward and saw a figure approaching him in the darkness. It was a giant bat. Bruce was at first scared but then decided to take that image and put fear into the hearts of those who did evil and criminals.

When Bruce grew up, he studied combat, science, psychology, and criminology. With the assistance of his butler and guardian, Alfred Pennyworth, he developed new technologies and weapons in the "bat caves" beneath Wayne Manor, and a new persona for himself -- that of "the Batman," a frightening, phantom-like vigilante whose self-appointed mission was to lurk the darkened streets of Gotham, meting out rough justice to criminals. 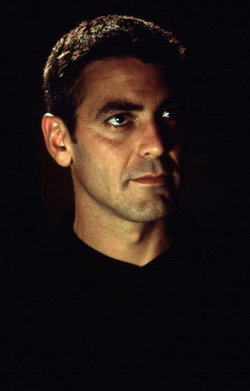 Bruce Wayne is a deeply traumatized man due to having witnessed the death of his parents at a young age. His psyche scarred, he has pledged to fight criminals for the rest of his life. Though he is socially withdrawn, he genuinely cares about the citizens of Gotham. However, he has difficulty forming relationships with other people, particularly with women.

"The cave was monstrous. It must have been there for centuries. And there deep in the shadows. I saw... it was coming toward me. I was scared at first, but only at first. The figure in the dark was my destiny. It would change my life forever. I would use its image to strike terror into the hearts of those who did evil. I would ensure what happened to me would never happen to anyone else again. I would have my revenge."
―Bruce Wayne to Chase Meridian[src]