The Mark I Batmobile was the Batman's original Batmobile. The Mark I was an all-black armored transport with heavy artillery weapons, much like the original Batwing. At first Batman often simply referred to this Batmobile as "the car".

This armored car was among the many inventions Bruce engineered in his Batcave. Originally it was only referred to as "the car."

Batman's first known use of the car was during the rescue of Vicki Vale from Joker. Wayne parked it outside of the Flugelheim, which he infiltrated through the skylight. The pair then escaped the building via zip-line and entered a wild car chase with Joker Goon Cars and GCPD cruisers. A grappling hook line was fired out of the side of the car to allow to turn a sharp corner at high speed, causing some of the pursuing vehicles to crash at an intersection. At one point massive construction vehicle blocked the street, and they were forced to abandon the car and continue to flee on foot. Batman pulled a small remote from his belt, activating heavy layers of shielding around the car with a voice command.

After a grueling street fight, Batman called the car with the communicator and when it arrived dramatically told it to "stop" directly in front of him, where it stopped on a dime. Wayne drove her to the outskirts of the city, through an off-road wooded area. Vicki screamed in horror as they sped toward a rock wall, which is revealed to be an entrance to a Batcave tunnel. They appeared to pass through it, though when Vicki looked back she noticed something lowering over the opening where the wall was.

After being called out by Napier in a disingenuous video message to Gothamites, Wayne responded with an all out assault on Joker's lair which he had been narrowing down on a map in the Batcave. Standing safely outside the Axis Chemicals plant, he sent the Batmbobile crashing through the outer gates.

Afterwards Batman met back up with the car outside the exploding facility. Joker suddenly appeared overhead in a helicopter mocking him with a lyric about going into the air, revealing that him and most his men had escape before the chain reaction had finished destroying the plant. Batman returned to the Batcave and took to the skies himself in the Batwing aerial vehicle to go "mano e mano" with the Joker at the 200th Anniversary Festival.

Batman used this Batmobile to fast travel to Gotham Plaza, where the Red Triangle gang launched a terrorist attack on the Lighting of the Tree Ceremony. He launched newly installed riot control weaponry, called Bat-Discs at their dirt bikers and clowns firing guns. He also used blunt metal extensions on both sides of the car to knock pyro jugglers off their stilts, who had been setting innocents on fire. Two clowns with submachine guns jumped onto the hood of the car from a bridge, started futilely firing point blank into windshield visor of the car. Visibly agitated by this, Batman sped forward, slamming on the brakes launching the pair of the car through the window of a vandalized gift shop. Coming upon a firebreather gangmember who had just set to the merchandise in the gift shop on fire, he used a hydraulic jack built into the bottom of the Batmobile to lift the car and turn it 360 degrees. Putting the firebreather directly in the path of the jet turbine exhaust, which Batman used to set him on fire. Afterward he emerged from the cockpit to personally rescue Selina Kyle from a clown with a taser.

Hijacked by the Penguin

Penguin commissioned blueprints from his engineers in the circus on how to tamper with it and weaponize it. A device was created by the gang that could hack the frequency and deactivated the shield mode on the vehicle. They were able get access through the armor panel seams and exposed areas around the vehicle, pulling out the hi-tech turbine the Sword Swallower began doing hotwire work. The Thin Clown installed receiver device on the bottom of the car that would allow Penguin to take control of the vehicle from his trailer.

Bruce later used a vehicle called the Batskiboat to traverse the sewers and find Cobblepot's lair.

Although Bruce Wayne later repaired and restored the Batmobile, he would eventually quit actively using this Batmobile and go on to use at least two different models, starting around the time Harvey Dent was scarred by Sal Moroni.

The initial conceptual illustrations for the car were drawn by Julian Caldow under the guidance of Tim Burton and Anton Furst.

Keith Short sculpted the actual body of the full-size car, which was placed over the chassis of a Chevrolet Impala. John Evans oversaw the construction of the vehicle. 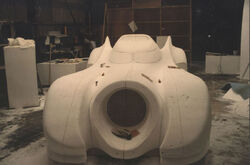 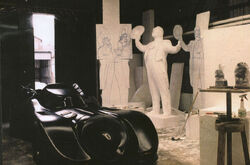