Selina Kyle is a former secretary that suffered a grievance with her rich boss Max Shreck, who attempted to kill her. She became a theatrical criminal in Gotham City, garnering attention from newspapers like Gotham Globe. She still prowls the night in parts unknown.

Not much is known of Selina's early life other than she attended catholic school and taught by Sister Mary Margret. As an adult she moved downtown Gotham City, renting a flat near Gotham Plaza. She became the personal secretary to Max Shreck at Shreck's. Selina befriended a multitude of neighborhood stray cats and fed them through her open kitchen window.

She eventually stumbled upon documents regarding a Shreck power plant that would drain the city of power. Upon the discovery of her boss's corruption, he pushed her out of her office window. Surrounded by the alley cats after Max Shreck pushes her out a window, Selina Kyle's repressed rage allowed her to transform into the Catwoman. Shortly following her transformation, she joined forces with the Penguin.

Selina eventually corned Shreck with her bullwhip at the Old Zoo in Gotham Park. She electrocuted Shreck by pulling a cable on Penguin's generator, causing an explosion. Before disappearing in a cloud of smoke, she appeared to kiss Shreck with a stun gun placed under his chin; Batman never found her body.

A short while later when being chauffeured by Alfred, Bruce thought he spotted Selina's silhouette struggling to walk in her tattered catsuit. When he emerged from the car Bruce found only her cat, Miss Kitty. On the way home with the cat, Bruce grinned to himself, wondering what had become of his girlfriend.

Sometime later, Selina managed to recover from her wounds and mended her suit back to pristine condition. The next time the Batsignal was lit, she defiantly rose on a rooftop, ready to return to the streets as Catwoman once again.[1]

Selina has above average athletic ability, a champion gymnast in high school. Frequently beating her boyfriend at Racket Ball, Selina beloved to be the source of their breakup. She attended rape prevention classes[2] and has some martial arts knowledge, but not skilled enough to defeat Batman without distracting him in some way. She also displayed indomitable willpower after sustaining three gunshots to her arms and thigh. Selina frequently displayed incredible luck in harrowing situations and murder attempts. 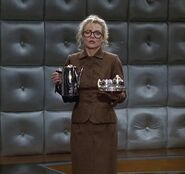