"My name is not Oswald! It's Penguin! I am not a human being!! I am an animal! Cold-blooded!!"
―The Penguin to the Red Triangle Gang[src]

Oswald Chesterfield Cobblepot was a deformed man who was abandoned and raised in the sewers as a baby. He carried deadly weapon concealed umbrellas and his horrible past turned him into a bitter and ruthless psychopath known as the "Penguin".

Oswald Cobblepot was born in 1959 as the son of wealthy parents Tucker and Esther Cobblepot. He was born severely mutated physically, being overly rotund, with a long pointed nose and flipper like hands. His parents abandoned him as a child due to his appearance and showing homicidal tendancies when he attacked the family cat, tossing his pram into a stream. He ended up in a zoo and grew up close to Penguin birds there. He later became a freak show performer harboring a homicidal grudge against the aristocrats of Gotham City.

He forms a criminal group called the Red Triangle Gang made up of his fellow show performers after the circus was shut down. He then shifted to Gotham to seek out his birthright, based in the city's sewers. He kidnaps wealthy department store owner Max Shreck and convinces him to help him. Shreck, however, has a hidden agenda. At odds with the Mayor, he intends to install The Penguin as mayor as his puppet.

Shreck stages for the Mayor's baby to be kidnapped by a Red Triangle Gang clown during a public speech. This was to both publicly discredit the Mayor and set up The Penguin as a hero upon saving the baby. The Penguin's existence was revealed to Gotham and he was seen by the population as a celebrity. Shreck used this chance to associate himself with The Penguin and help him find his parents.

After finding his original birthname Oswald Cobblepot, Penguin eventually wins the approval of citizens of Gotham and, after being persuaded by Shreck to do so, intends to run for Mayor.

When the subsequent plan was in action, Batman was framed for the kidnapping and murder of the Ice Princess. Catwoman became upset because she did not intend to kill the Princess, and then rejected the Penguin's advances on her, whereupon the Penguin tried to kill her, but failed. In the midst of Batman's attempt at rescuing the Ice Princess, the Penguin's henchmen sabotaged the Batmobile. When Batman returned to the car, the Penguin took control of it, wreaking havoc on the streets of Gotham until Batman managed to disable the Penguin's control. Amidst this, Batman managed to make a recording of the Penguin's taunts about framing Batman and fooling the city, thereby ruining his chances of being elected Mayor.

With the people of Gotham angry and the police after him, the Penguin fled into the sewers, revealing his true plan to kidnap and murder all the first born sons of the Gothamite elite and wealthy. He personally attempted to take Max's son, Chip , but agreed to take Max instead. Batman foiled the Penguin's kidnapping scheme, which lead to the Penguin deciding to launch missiles at Gotham Plaza using mind-controlled penguins. However, Batman jammed the frequency used to control the penguins, which caused the missiles to be launched at the Penguin's base. Batman confronted the Penguin, which led to the latter falling into the toxic waters in his lair. He then emerges from the toxic water and tried to kill Batman, but he collapsed from his wounds and died. His body is then taken by the Elder Penguins into the sewer waters as a final resting place.

The Penguin addresses the crowd in the cemetery

Penguin in his lair 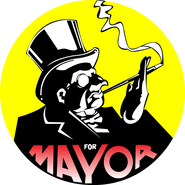