"One man is born a hero, his brother a coward. Babies starve, politicians grow fat. Holy men are martyred, and junkies grow legion. Why? Why, why, why, why, why? Luck! Blind, stupid, simple, doo-dah, clueless LUCK!"
―Two-Face[src]

Harvey Dent was the district attorney of Gotham City for 1989-1993. He vowed to bring the wave of crime to a halt by getting "Boss" Carl Grissom in court and convicted. Dent would come to be scarred by acid thrown on him by "Boss" Moroni.

The trauma combined with Batman's failure to protect him shattered his psyche. Thus, the vengeful, psychotic crime lord known as "Two-Face" was born.

Harvey Dent was elected district attorney of Gotham in 1989. He promised to take down the crime lord Carl Grissom, and the rest of what he called a, "Nest of vipers."

While walking out of Gotham City hall Mayor Borg tells Dent and Commisioner Gordon that he wants the 200th anniversary party to have, "Hot dogs, balloons, the whole smear. I want it celebrated proudly and publicly." Harvey replies, "We're already in bankruptcy and haven't seen one balloon." He also mentions that it isn't safe to hold a public event like that yet. Borg tells them that if they can get several people to attend then the businesses would return to Gotham. Gordon tells Borg that he doesn't think that would work since, "They're scared." "They won't be scared," Borg replies, "Once you get Grissom into that courthouse. I promised that remember."

Because of his legal position, he later attended Bruce Wayne's charity for the Gotham 200th birthday celebration. He hangs around with Commissioner Jim Gordon at a craps table and is asked by reporter Alexander Knox about his view on the Batman. He answers, "Mr. Knox, we've got enough problems is this city to worry about ghosts and goblins." Harvey then walks away as Knox humorously comments, "That is not a denial."

After falling into a vat of toxic chemicals criminal Jack Napier became The Joker, who then has the major mob bosses assassinated. Dent appears on the scene with Mayor Borg. A reporter from Action News asks Dent on what he has to say to which Dent replies, "I have no comment right now."

The Joker's Reign of Terror Edit

When Joker poisons Gotham's cosmetics products with his toxin called Smylex. Dent and his department work hard to try and find out what the Joker is poisoning, being heavily pressured by Mayor Borg to do it fast so that the 200th Anniversary Party of Gotham City can be held.

After several people have been killed by the Joker he, Gordon, and Borg announce to the public that Gotham's 200th Anniversary Gala has been indefinitely postponed, because they cannot ensure the public's safety. Joker then interrupts saying that he himself will hold the party, and dump twenty million in cash on the crowd, which gets the civilians' interest. Borg says that they are not going to make any deals, but Joker then cuts him off.

A Message from Batman Edit

After the Joker is killed Dent and Gordon have a press conference where Gordon declares that the rest of the Joker's men are being rounded up. Harvey then tells them that they have received a message from Batman to the citizens of Gotham. It goes... "We've received a letter from Batman this morning. 'Please inform the citizens of Gotham that Gotham City has earned a rest from crime. But if the forces of evil should rise again, to cast a shadow on the heart of the city, call me."

"Question", Knox says, "How do we call him?''" Gordon then walks over to a floodlight that is off and says, "He gave us a signal. He then turns it on revealing that it is the Bat-Signal.

The Trial of Boss Moroni Edit

Dent had been Gotham's district attorney for 4 years. In 1993, he put the current mafia don of the city Boss Moroni on trial. During the trial Moroni threw acid into Den't face, and despite Batman's efforts, Dent was hit, and half of his face became scarred. He was driven mad and took up the identity of Two-Face. He vowed revenge against Batman for not saving him. He was subsequently captured and sent to Arkham Asylum.

2 years later, Two-Face escaped from his cell on the second anniversary of his arrest, his escape being discovered by Dr. Burton, who contacted Gotham City's Police Department.

Two-Face and his thugs robbed the Second Bank of Gotham. They had taken hostages and look like they were going to get away when Batman intervened and stopped the robbery. He pursued Two-Face by boarding his helicopter. However, Two-Face escaped before crashing his helicopter in to the Statue of Justice over Gotham Harbor.

At his lair, which was split in half like his personality, he had two molls, Sugar and Spice. Spice favored his 'dark', scarred side, while Sugar favored his 'good' side. Two-Face traveled to the circus looking for Batman- with the circus currently holding a fundraiser attended by Gotham's elite, Two-Face concluded that the odds were excellent that at least one of them knew the Dark Knight's identity if they weren't Batman himself-, and threatened to blow the place up unless his enemy turned himself over (although the subsequent riot in the circus prevented Bruce Wayne obeying his order). He was responsible for the origin of Robin because, when The Flying Graysons tried to stop him, they were all killed by Two-Face apart from Dick, the youngest Grayson, who went on to join Batman as Robin.

Two-Face joined forces with the Riddler and the two gained knowledge through The Box and discovered Batman's true identity. Following this, they traveled to Wayne Manor and the Riddler destroyed the Batcave. Two-Face, on other hand, had his henchmen attack Bruce and Dr. Chase Meridian while flipping his coin, which kept on landing good side up, preventing him from doing any wrongdoing. As soon as the scarred side came up, he fired his pistol at Wayne, grazing him in the head. Two-Face wished to finish him off, but the Riddler intervened and they left, kidnapping Dr. Meridian and leaving behind a riddle.

At the Riddler's lair Claw Island where Two Face was hiding out, Batman and Robin got separated. Robin had the opportunity to kill Two-Face but didn't want to be like him. Two-Face used this to capture Robin. He and the Riddler then tried to make Batman choose between Chase and Robin but he saved both. Two-Face flipped his coin to decide if he would shoot Batman, but Batman tossed a handful of identical coins into the air. Two-Face panicked and tried to find his coin but stumbled and fell into the pit on a watery bed of spikes. The coin then fell good side up into Two-Face's open palm before he sunk underwater.

2 years later, when Bane broke into Arkham Asylum's storage room to get Mr. Freeze's cryogenic suit, Two-Face's unique costume was glimpsed hanging on a shelf. It was a costume he had left behind during his last escape.

BullzEye: I've always found that jumping from you in the part, to Tommy Lee Jones, is an insurmountable continuity problem.

Billy Dee Williams: (laughs) Yeah, I would say so. But, c'mon, it's the movies. They can do anything they want to do in the movies, and either people will buy it or they won't buy it. (Bullz-Eye.com int, 2007) 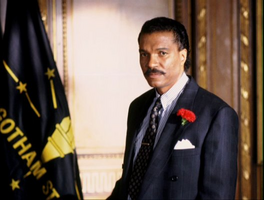 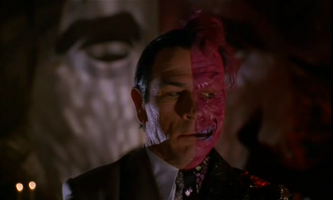 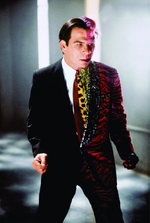 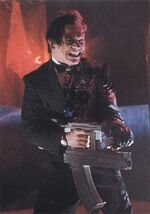 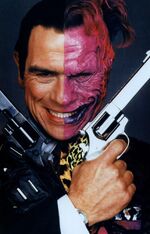 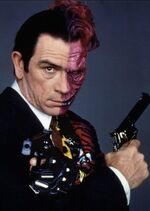 Retrieved from "https://batmananthology.fandom.com/wiki/Two-Face?oldid=9665"
Community content is available under CC-BY-SA unless otherwise noted.