Wayne Manor is the personal residence of Bruce Wayne, who is also Batman. He was raised there from birth, first by his father, Thomas Wayne, and mother, Martha Wayne, and after their death, by his butler and surrogate father, Alfred Pennyworth.

Several hidden entrances led to the Batcave, which rested underground, beneath Wayne Manor.

Vicki Vale and Alexander Knox attended a benefit at Wayne Manor, where Bruce was taken by Vicki's charm.

The passage way to the Batcave was uncovered by turning on the lights of a miniature Wayne Manor in a nearby aquarium and dropping through a false floor in an iron maiden. 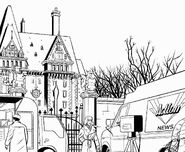